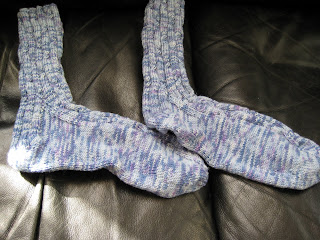 I am going to make a start on the April Sockamania socks - Bluebell in a little while. I'm steering away from the colour scheme provided and will use the colours provided at a later date. For this I am going with some vintage 4 ply in blue and pink. 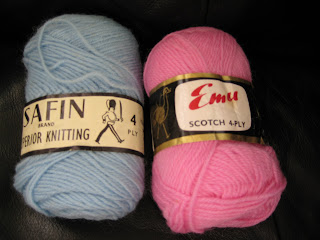 I just don't get it at all. We took the dog for a long walk yesterday and this picture was taken in glorious sunshine. Less than an hour later it was blizzard conditions (well maybe not quite but very snowy) then the sunshine was back again. Today it is nice and sunny. 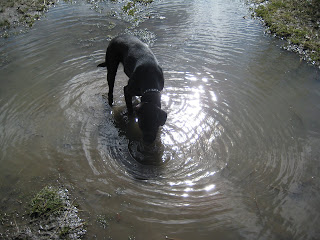 Why are eggs such a silly shape? Is it to make it easier for the hen to part with it? Goodness knows why but have you ever tried to make a Creme Egg balance? It is impossible unless you did like I did and balanced it against the box. Sainsburys were selling all their Easter goodies off at half price yesterday and it would have been rude not to take advantage. We got 2 boxes of 3 Creme Eggs, 2 packets of Mini Eggs and 2 Black Magic eggs (Creme Egg sized not huge ones) all to share mind not just for me.

I took advantage of the mini eggs and made a chocolate fudge cake which took far too long to cook and then the fudge ganache was runny so it had to sit in the fridge overnight to set.

Yep not a speck of snow at Christmas but this morning when we got up the white stuff had fallen so we have a white Easter. It disappeared quite quickly but not before Charlie had been out for a nosey at it.

I took some pictures and put this together earlier today.

Yep - today is Spring (scientifically the Spring Equinox was yesterday).

The forecast is for snow. Mmmmm don't think I have ever seen a White Easter but we will see because they never get it right. Don't know what happened to all the heavy rain we were supposed to get yesterday but it seemed to miss us. However we had a return to strong winds which rattle the fence and take all the cans around for a walk in the middle of the night. Why can't wind do things quietly.

A spring picture today though in spite of the weather. Here is a skein of sock yarn with the name 'Think Spring'. I don't have any plans for it just yet because I need to get on top of the other projects I have on the go.

I discovered scrapbooking in 2004 when I was searching for a suitable baby book to record the milestones of my son and I have stuck with it.

There is a massive selection of products available. I don't have one particular favourite manufacturer as they are all so different.

Another massive market is kits. There are hundreds of them out there. My favourite is The Scraproom because they don't overload you with lots of matching papers you will never use. Their kit contains 4 page kits which are all completely different so you feel you are getting a varied choice. I recently discovered Bad Girls kits and am going to give them a try.

I did something on my last layout that I haven't done before and used a cloth swatch. This one is a Cath Kidston one and the best thing was that it was a freebie. If you go to the website you can choose up to 5 (I think) swatches free. You need to click on the fabric you are interested in and if they offer a swatch of it then there will be a link there to order it.

Sock knitting. I love to do it but as I previously said my family find it amusing. Through gritted teeth I will carry on though.


Here are the projects I have on the go at the moment.

This one is the Sockamania March sock. You can choose to either sign up and just get a free pattern by email or sign up for the Sockamania Plus through Etsy and get the yarn and the pattern in the post. This is the option I took and the yarn they sent is lovely.

This one is the first Sock Knitters Pentathlon sock and is called Jacobean. The idea is that they challenge you to knit a sock from their pattern once every 2 months which I think is a manageable time limit. There are some people on there who have done a pair in 3 days. No offence meant to anybody but do these people have lives or do they just sit and knit all day. I have no idea what the yarn is because I have had it for ages and ages.

Finally this one is from Simply Knitting Magazine. The link shows the pattern.

Look at this lovely blue sky. The picture was taken this morning and I took it because we are forecast to have some very heavy rain over the next few days and I wanted to remember what blue sky looks like.

Using the facility on the camera to isolate one colour and do the rest in black and white this is a random picture of my peg basket.
Posted by Kerry at 1:18 pm 1 comments

Why does dog hair seem to get everywhere. For a short haired dog who isn't supposed to shed very much Charlie seems to loose an awfully large amount of fur. It gets everywhere. He isn't allowed upstairs but I have hoovered the stair carpet this morning and the amount of fur that had been walked up there by the rest of us was unreal.

We said he could maybe have a friend when he was a year old. His birthday is on saturday and I have been reminded many times that we could have another dog too. We paid a visit to Dogs Trust last weekend but nothing really appealed to us. Although there were a couple of really cute miniature poodles. I could have taken them home there and then but they had already been rehomed and apparently it isn't very macho to have a poodle on the end of the lead. With 4 males in the house I suppose all the dog walking would have been down to me.

From one extreme to another though because we are considering a Newfoundland . I think maybe we are mad to take on something which, once fully grown, has the potential to weigh more than we do but they have so many good character traits that I can forego the size part. Their temprements are supposed to be second to none. That was one of the reasons for buying a labrador (even if he is a cross) so something as gentle with children as a labrador is a definite plus.

Apparently I am a real saddo for having the time to create a blog.

Tomorrow the other thing my husband thinks is sad - knitting socks.
Posted by Kerry at 2:36 pm 0 comments

What is it all about?


Dogs because we have a Labrador Patterdale Terrier cross called Charlie. 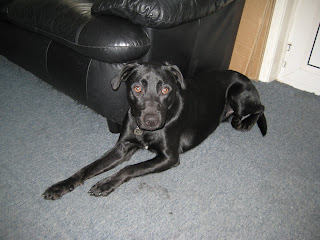 Socks because much to the amusement of my family I like to knit socks. They keep calling me Dobby from Harry Potter.


Scrapbooks because that is my main hobby. It is something I love to do but never seem to find the time or inspiration to do many pages.

Not forgetting Oliver the cat. 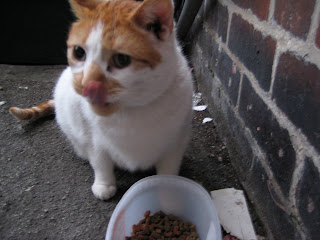