I haven't really been hiding under a rock all this time.  Things have happened and for various reasons I haven't got around to writing anything.

We had a stay here 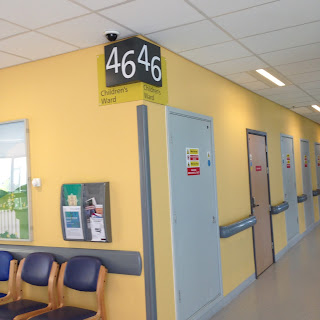 because of a nasty injury during a rugby match. The youngest landed awkwardly during a tackle and his own body weight on top of his arm dislocated his wrist and fractured the growth plate on one of his arm bones.  Not a pretty sight and I've never been in A&E and seen them move so quickly. He bypassed the whole waiting room, was weighed and was on morphine within minutes of us arriving. This is a child who has a huge pain threshold and managed to sit through a whole afternoon of school and then walk home with a fractured patella sleeve 2 years ago so that told me how bad it was. They classed it as needing urgent theatre time. Unfortunately there was an emergency elsewhere in the hospital which prevented him having it operated on that afternoon so we spent the night on the childrens ward and he went to theatre first thing the next morning.

He was incredibly brave and went to school the next day. He actually didn't miss any days of school with it apart from fracture clinic appointments which is a massive achievement.  His downfall on school attendance was a bug this year but hey ho that's how it goes.

Thankfully it was his right arm and he is left handed so he managed to sit his year 6 SATs two weeks later without the need for a scribe.  I am so proud of him for managing to get through the most stressful time in year 6 and he did extremely well getting level 5 in every external test and level 4 in writing which is teacher assessed.

We had already booked a holiday to the Norfolk coast during half term in May.  Rugby is his life so not being able to throw a ball about on the beach was a major issue for him.  Football wasn't quite the same.  He spent a lot of time finding skimming stones to throw into the sea with his good hand. 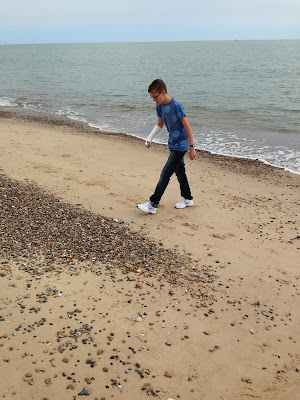 He coped incredibly well and I think the autistic part of him accepting that if something has to happen a certain way then that is what is happening has helped him a lot.  He knew he couldn't do certain things and just accepted that.  I won't say he hasn't been frustrated because he has.  Mainly over not being able to play rugby.

His injury happened at the end of April and this weekend just gone he played again.  He's been to training every week to watch and helped the coaches out at matches.  As soon as the pot came off and he was allowed to join in again with general training he did.  He did the exercises the consultant showed him religiously to gain strength and movement back. He counted the days down until he was allowed to do contact sport again. Determination has paid off.