I've always heard lots about A to Z challenges but to be honest I have never found enough interesting facts about myself to be able to be bothered.  Courtesy of one of my facebook friends I found a different A to Z challenge for the new year that I actually want to do.   Each letter gets two weeks of your time to make as much use out of things beginning with it as possible ie books/food/films etc. I am rubbish at explaining things so why not hop on over to Nicole's blog where she explains her idea perfectly.  If you are interested in joining in then she has set up a community to discuss/share ideas for each letter. 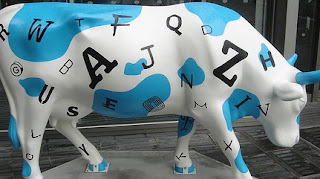 A merry christmas to everybody - stay safe on those icy roads. 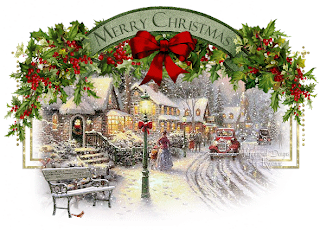 We had snow last night and went to the park this morning. Daisy loved it and my 5 year old and his dad managed a snowman. We had to use dog biscuits for it's eyes and mouth and an empty doggie bag for the mouth. Oh and dad's hat. One of the biscuits magically disappeared when Daisy went past it. 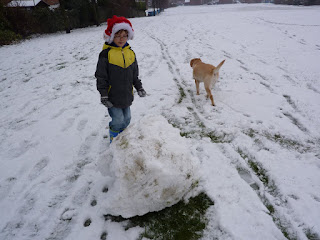 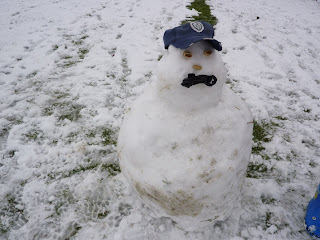 Finally since it is almost Friday here is Skywatch Friday taken last night. 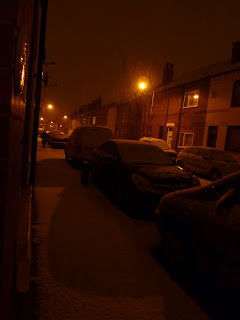 Last minute christmas essentials such as fresh veg and salad, bread etc can only be realistically bought a couple of days before and I usually end up doing a christmas eve dash. I decided this year that it would be different and I would be prepared so walked up the hill to Asda for our sprout tree and other bits and pieces. I say walked but slid would be a better word for it. Elsewhere in the country seems to have had lots of snow. We had a couple of centimetres (not even an inch for gods sake) that very quickly turned to icy slippery conditions. Considering the number of empty spaces in the supermarket car park it would have been easier to take the car but it's done now and we got some exercise in the process.

See those gold things - they are mirror ball tree decorations. They were reduced to £1.50 and I couldn't resist. Maybe I might think again when they blind us as the sun comes through the window. 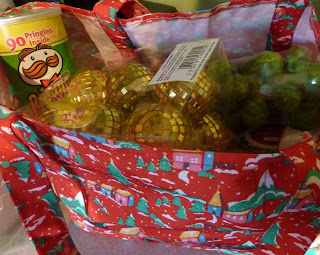 I just checked out the forecast for the next week and WOW looks like we might actually get a bit of snow after all. It would be lovely if it comes on christmas day but I am not willing to put money on it as weather forecasters are notoriously unreliable. 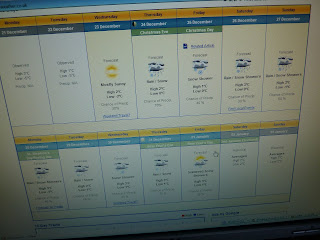 It's been a week since we got back home from our weekend away at Center Parcs in Sherwood Forest so better late than never are some piccies.
This was the Woodland Lodge type villa we stayed in. 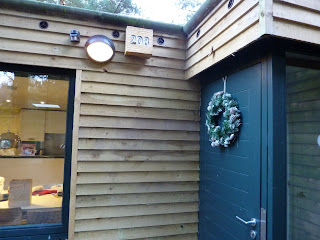 It was supposed to be recently madeover by some interior designer and whilst it was very nice on the eye, when you looked closely the finish wasn't what you would expect from somewhere so expensive. Things like paint splashes on the tiles and around the doors are only little things but very noticable. If I had as much money as the owner of Center Parcs then I think I would have made sure I used professional tradesmen who are capable of painting a door and not getting it on the wall. Maybe that is why he has so much dosh.
Anyway that is only a little thing and it is only a bit of paint and not the end of the world. It is my only criticism of the accommodation.
This was the light over the dining table. I could have done so much more than this shot had I thought about it properly. 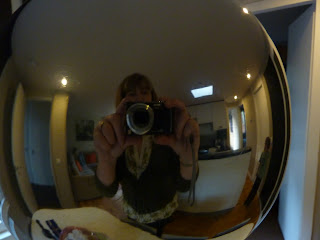 There were lots and lots of illuminated trees and little scenes like the reindeer below. 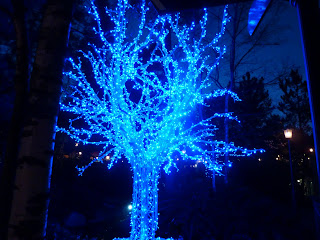 I caught this one at sunset. 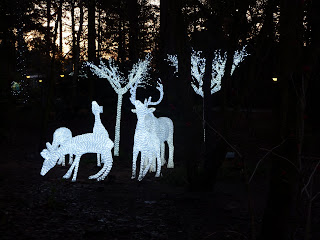 I always thought squirrels hibernated at this time of year but there were plenty of them around. Maybe because there is a plentiful supply of food from the visitors. 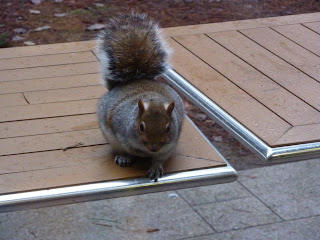 This family of swans came carol singing one evening. Actually they were pretty much outside the patio door most of the time pecking on the window. 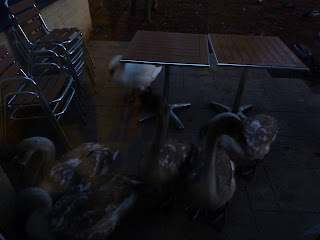 Email ThisBlogThis!Share to TwitterShare to FacebookShare to Pinterest
Labels: holidays

We haven't had a great deal of snow but what bit we have had has now turned mostly into packed ice which isn't very pleasant to walk on. Some bits have melted where the sun has reached them.

I wasn't brave enough to take the dogs out yesterday so they had to make do with a run around in the frozen yard. Today I figured it would be best to just get on with it and take them out. One at a time though because otherwise I would be on my backside more times than upright.

I dared to venture into the park with Daisy. Thankfully somebody had gritted the slope up into it and it was almost melted on the grass. I did manage a couple of photos with my phone. 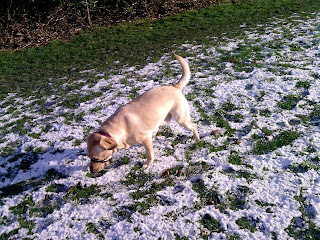 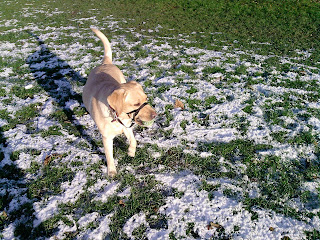 As for Charlie - well he isn't very good off his lead and is going back to dog training in the new year so he just had a street walk which was scary to say the least. My wellies have quite a bit of grip but not when a dog is pulling with all his might. Anybody watching would have been laughing their ass off.
Next time - our holiday last weekend to Center Parcs at Sherwood Forest. Not got enough time to tell you about it now so maybe on monday or tuesday.
Oh and before I go - the challenge on my shop blog is running until 31st December and has a prize of 5 packets of white flowers. Also running in the shop is the Christmas Countdown half price offer. Everyday there will be a different item running at half price. Today it is Rainbow Pearls & Crystals which are so versatile and the colours are fabulous.
Posted by Kerry at 1:22 pm 3 comments 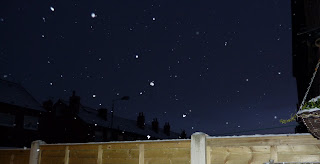 We had a sprinkling of snow last night and again this morning. This picture was taken this morning for Skywatch Friday. 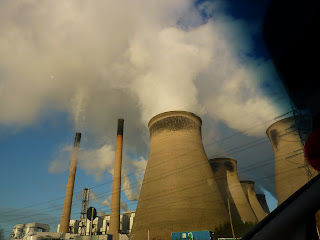 I took this on the way past the power station this morning for Skywatch Friday
Posted by Kerry at 11:41 am 5 comments

I've had a little bit of a drought just lately but today I thought since it was a week since I set the December challenge over on the shop blog then I really ought to get my rear end into gear and do an example.

It is very rushed and certainly not one of my better pieces of work but it is a layout for a change. 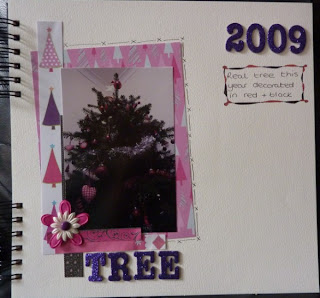 I did a bit of a spring clean of my scrapbook stash last week - or maybe that should be autumn clean since we are still in the autumn equinox for another week or so. I found a few bits and pieces of christmassy paper and this 12x12 album so I scrapped straight onto the page and hope to do quite a few of the prompts from the Holidays In Hand course.
Posted by Kerry at 7:44 pm 0 comments

Email ThisBlogThis!Share to TwitterShare to FacebookShare to Pinterest
Labels: scrapbooks

This week's Skywatch is a photo I took earlier this week on a dog walk when it was frosty. The sun was out and the frost was just starting to melt so you can't see much of it but yeehah another blue sky. I even managed to get myself in it lol. That wasn't intentional. 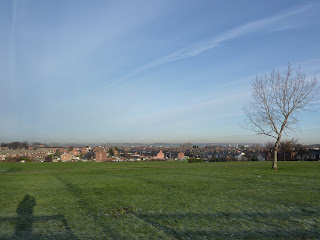 Edited To Add:
Somebody just commented that it looks really peaceful. Anybody who knows where this picture is will agree with me and say that it is anything but peaceful. Directly behind me on the shot is Asda and a very busy main road. I love how we can create an atmosphere through a photograph.

Yes I know it is December and no we don't have anything remotely festive up yet although my son is sat at the kitchen table writing christmas cards as I type this. Bugs have hit big time this week with 4 out of the 6 of us down with a 24 hour sicky thing so maybe I might have a christmas tree picture to show you sometime next week provided I don't get it too.

Instead I have given my blog a christmassy makeover.

Miss Marple actually was the name of the November mystery sock in the Sock Knitters Anonymous group over on Ravelry. The clues were released over the space of 4 weeks and I must say that I really enjoyed this one. 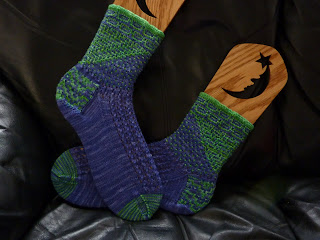 It's very rare I knit anything with more than one colour of yarn. If I don't want plain socks then I use a yarn that has a few colours in it. The method of knitting for this pattern was mosaic which is really easy once you get the hang of it. Instead of hauling both colours around the round of the sock with you lots of slip stitches are used and you just one one colour per row so you don't get that awful pulling or holes when you are going between colours. It's definitely a technique I will try again.
In answer to Carmen who asked a question about the wooden foot shape and whether I knit on it. No I don't. It is called a sock blocker and is used for shaping the sock after knitting it but it is also a good way of photographing my socks without putting them on and getting into odd unnatural positions to get the same sort of shot.

The new challenge is up over on the shop blog so if you want to win some flowers hop on over there to find out how.
Posted by Kerry at 5:39 pm 4 comments