A friend mentioned on facebook that she had had an email saying something she had bought on Ebay had been cancelled by Ebay because the seller used the term shabby chic on the listing and apparently the trademark for the term is owned by somebody.

I thought it sounded like the totally ridiculous thing Ebay would do but was curious if it was actually the case or whether it was somebody just saying so.  Apparently shabby chic is  actually trademarked by somebody called Rachel Ashwell.  There is an Ebay page set up explaining all the ins and outs of it.

I don't know about you but I was totally unaware of it.  I thought it was just a term used to describe that particular style.  Lots of websites certainly seem to think so.  A simple google search brings up thousands if not millions of results.

It got me thinking about some of the shops and how they can use the term without this lady taking their ass to court and suing them for breach of trademark.  This one for example - Shabbychicshop.co.uk or Laura Ashley or Cath Kidston.  Even Prima had a range of flowers called Shabby Chic and I definitely used the term when I was selling them because that was their name.

The photo I've chosen for this post comes from here. 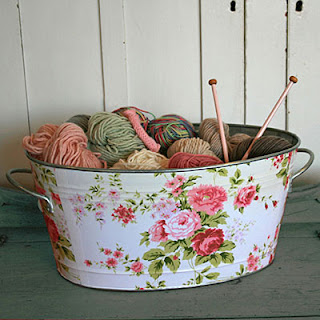 I want that mini tin bath type thing for my own yarn.
Then there is this blog.  I'm presuming that since she isn't selling anything then it is OK.
Before I leave it at that I also did an amazon search and it came up with over 27,000 results.  Surely not all those are made by Rachel Ashwell's company?
Posted by Kerry at 3:59 pm

I think Rachel wotsit needs to think about this a bit... Maybe I could take a Trademark on the phrase "Hand Made" - then no-one could sell anything on Etsy any more!!

Rachel Ashwell might claim she's got copyright over the term but she'd have a hard job succesfully pursuing that in court.

It's common practice for companies to want to copyright their company name and protect themselves from people trying to trade under a similar name and steal business from them/mislead customers, however Rachel has called her company after a pre-existing term which is already is general usage and she cannot possibly hope to litigate on that basis. She did not invent the term and it's her own silly fault for calling her company by that name!

It would be like me creating a company and calling it "Paper Tearing" and then telling everyone that they can't use that term anymore because it infringes my copyright! :lol:

Well said, Ali! Perhaps someone should tell that to Ebay, who seem to be a little bit confused...

It is rather silly, isn't it?

i want that mini bath too!!
ebay are just taking it a bit too far - idiots!
Well said to Lizzie and Ali :)

Rachael may have started the term and as they say put a lot of work in establishing a brand, but it has taken on a life of its own. It is now a part of the decorating style vernacular. Like we say 'band aid' when we mean 'sticking plaster' and you can probably think of other terms for your own culture.

I guess we will have to rename it a call it "grunge chic" or "scruffy chic".... but be quick unless someone else comes along to trademark or copyright it too! LOL

I do think the shabby chic term was in use before Rachel Ashwell came along- interesting that she's choosing to pick on small time sellers on ebay than more established UK stores. I know her company closed a lot of shops due to lack of sales so maybe this is them being over protective of their "brand". I think it's stupid because it creates all kinds of PR headaches for her but to each her own I guess. I LOVE Kath Kidson!!! How I wish she has a NYC shop!!! Her fabric tapes are to die for. :)