My little missy is one year old today. 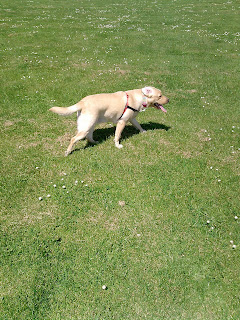 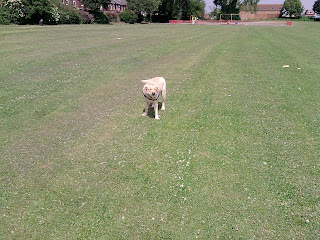 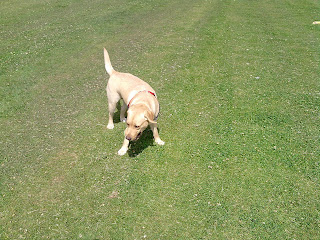 Having just read the whole of the Twilight saga I couldn't resist starting on these socks when I saw that they were called Twilight. The yarn is one I dyed up in March but have only just got around to using. I think the colours fit twilight well or maybe more sunset. 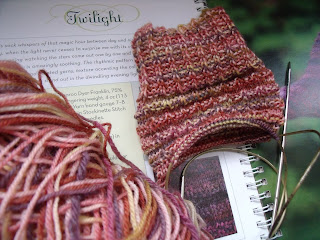 I also have a blog award that I will get around to sorting out later. Thanks Jo.

Fresh off the needles yesterday is my own Lollipop Garden sock pattern. It is the first one I have designed myself so please bear with me and let me know (lambournekerry@aol.com) if there are any errors.
I knit this using the magic loop method and have written the instructions as per that method. 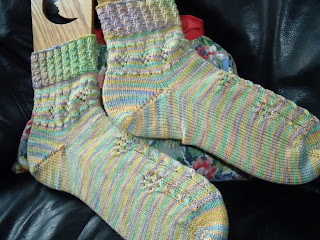 Here goes:
I used Blue Moon Fiber Arts Socks That Rock Lightweight in Pastels but any 4ply yarn should work the same.

Abbreviations:
K - Knit
P - Purl
K1tbl - Knit one through back of loop
k2tog - Knit 2 together
ssk - slip slip knit
yo - yarn over
M1 - Make 1
yf - yarn forward
w&t - wrap & turn
Cable - put next 2 stitches on cable needle and hold at front, knit next 2 stitches and then knit the stitches from cable needle
Twist - put next stitch on cable needle and hold at front, knit next stitch and then knit stitch on cable needle
Instructions
Using whichever invisible cast on you prefer cast on a total of 24 stitches (12 each needle). This is a good way to do it but obviously use whichever method you prefer.

Repeat in this manner increasing a stitch just after the first and just before the last on each set of stitches (if using magic loop) until you have a total of 64 stitches. Make sure you have 32 stitches on each needle and proceed as follows:

This ends the pattern on the foot section. Carry on in plain stockinette stitch until the foot is about 2 inches less than the length of your foot. You should end after the foot section to start making the heel on the sole section. 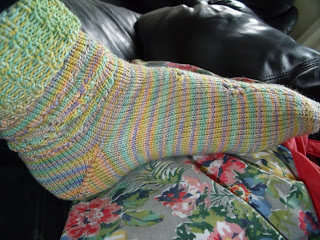 You are working on the sole stitches only for this part.

Carry on until you have 10 stitches in the middle part of your heel and 11 wrapped stitches on either side. You should have just done a purl row.

Knit 8 rows plain and then commence rib. You can make this section longer if you prefer. I did 8 because my yarn was running out. 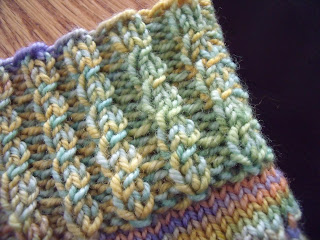 Row 1 P2 ignore the next stitch and knit into the second one but don't slip the loop off the needle as you normally would. Then knit into the stitch you ignored and slip both off the needle at the same time. You should still have 2 stitches. Repeat across the row putting P2 between each mock cable you do.
Rows 2 to 4 P2 K2

Carry on for as long as you require your rib to be. I did 20 rows.

Here is my interpretation of the sketch. 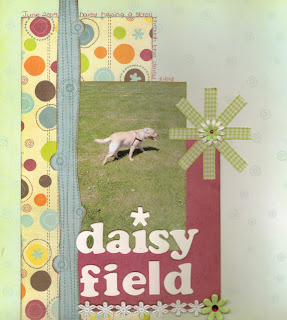 I used Fancy Pants papers and Making Memories ribbons, a Prima Daisy and some other flowers I got in a kit from Cleo's Crafts.
It seems like the last few layouts I have done have been of Daisy but that will change soon. The new Guttergirlz challenge has been up a few days and I have finally decided in my head what I am doing and it certainly doesn't involve the dogs. Prams - aarrgghhh
Posted by Kerry at 1:34 pm 5 comments

I have finished the first sock I designed myself. Once I have completed both socks I will take some proper photos and write up the pattern to share.

After the ripping out incident a few days ago I started again by modifying the chart slightly and this is progress so far.

I finished them last week but forgot to photograph them. I love this pattern and can definitely see me using it again.

That's probably going to be the title of the sock pattern I am designing. I'm not 100% sure of the pattern yet. I started yesterday and knit toe up almost to the heel but the pattern isn't standing out very well. It's either going to be use different yarn or change the pattern slightly. Either way I'll figure it out I guess. This is what I have so far since I pulled most of it out a few moments ago. 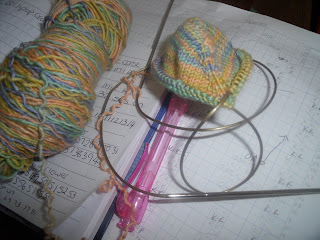