A friend asked me to make up some samples of chicken items and this is the result. 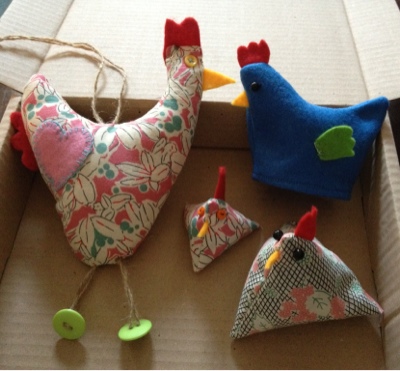 They need some modifications but I really enjoyed making them so will definitely be making some for my kitchen when I get around to decorating it.

is the verdict on degenerative Achilles tendinopathy today.

I'm not one for filling Facebook with status updates of self pity like a lot of people when they get a tiny bit of pain. You know the people - we all have a 'friend' who does that. The sort who if they really had a migraine or flu they would be in bed and nowhere near Facebook!

Anyway back to the point of this post. I'm not one to feel sorry for myself publically and this is more of a for myself post so I can look back and see how I felt, not for any sort of sympathy because of how I am currently feeling.

So my story with degenerative achilles tendinopathy started about 4 years ago when I stepped awkwardly with my left foot and apparently ruptured something. I didn't get help for a few months until it got too uncomfortable to cope with. The physio I saw said I had ruptured something which needed exercises to heal but there was scar tissue. The exercises really helped and I was soon back to normal.

Spring forward a few months and my other ankle started niggling coming downstairs and when I got up after sitting down for a length of time. Nothing particularly painful so stupidly I ignored it.

I started running last September and it stayed as a niggle but no more than it had been before. I was hit and miss with the running but got back up to week three of c25k after Christmas and one day I had this burning in my heel and partway up my calf which I stupidly tried to work through but had to admit defeat and haven't run since because it hurts too much.

I went to the doctor who gave me some exercises for a couple of weeks with the instruction that if it didn't improve she would refer me to physio. Needless to say it didn't improve so the referral was made. I also mentioned to her a painful itchy bruise I had on my other calf which wouldn't go away. Turned out it was a varicose vein so I had to see a consultant about that. He decided I needed it treating along the length of my left leg and scheduled the op for the end of April.

A week before the op the physio appointment came through and the result was degenerative achilles tendinopathy maybe caused by overcompensating for the original injury to my other leg maybe not. Plus my hips aren't working as they should either apparently. The op meant that the physio wanted treatment to go on hold until I had the all clear. That all clear came last week and yesterday I went back to physio.

During the time from the first physio appointment and the one yesterday things have deteriorated pain wise and the Achilles now hurts a lot both up and down stairs or hills plus I can feel the niggle all the time so I was keen to start working on it.

The physio gave me some stretching exercises, which I'm not going to lie, are painful, but it isn't going to start feeling better without a little bit of discomfort. I certainly could feel it while I was walking today. Three weeks of these and back for some more complicated ones.

Hopefully the road to recovery is starting and surgery won't be necessary. I've read so much on the subject on the interweb and I don't necessarily think its always a good thing.

I'll report my progress in a few weeks which *fingers crossed* will be positive :)

Email ThisBlogThis!Share to TwitterShare to FacebookShare to Pinterest
Labels: degenerative_achilles_tendinopathy

The Olympic Convoy Is In Town

Yesterday was our turn to have the Olympic torch parade pass through.

I walked up with my littlest man and his class. We managed to grab a kerbside spot amidst the chaos. 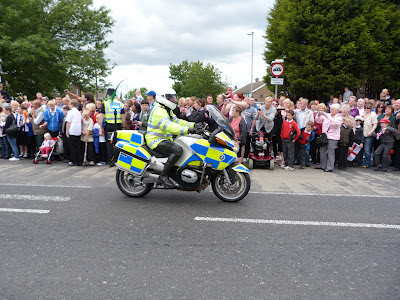 My other kids were further along the road and my daughter (who very kindly picked my 13 year old up from school and took him to the event) got a high five off one of the metropolitan police motorcyclists.  The kids I was with loved their pip pipping of their horns.

The atmosphere was fantastic.  The party buses were fab. 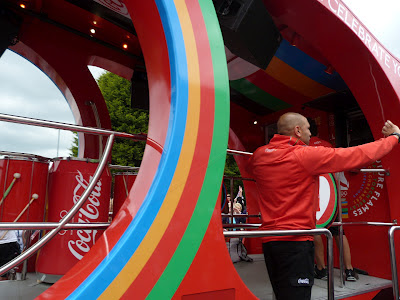 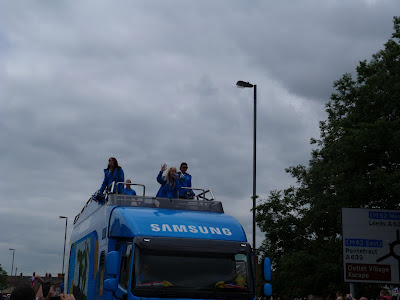 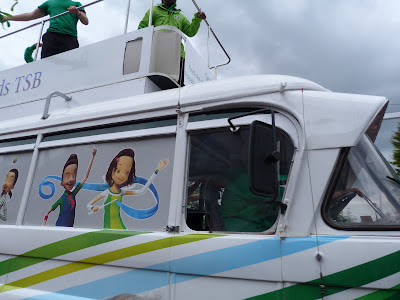 One of the coach drivers carrying all the crew slowed down and commented on the handmade torches my sons' class had made which I thought was lovely that their efforts were appreciated. 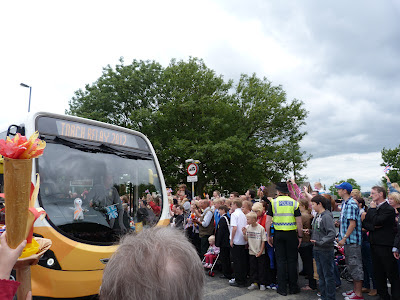 and then on to the main event.  Over in a flash but providing memories for so many people which will last a lifetime. 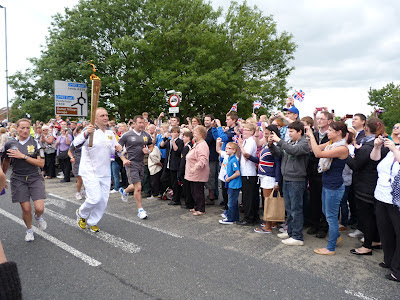 My baby Daisy reached the grand old age of 4 today.

I bought her a new bed during the week which she likes (I think). She's never really been one for chewing blankets, unlike Charlie dog who at 5 will still do it given half a chance, so I treated her to a posh one from House of Paws. Got it at a bargain price of £24.99 RRP is more than double that for the huge size I got. 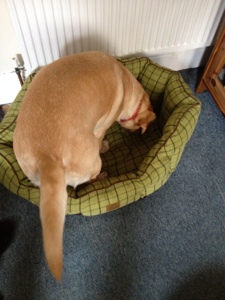 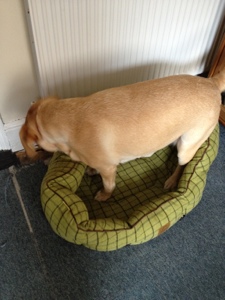 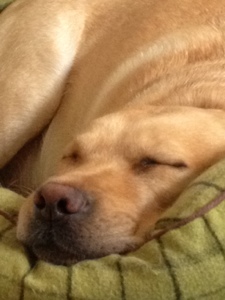 .......the computer went to the poorly computer hospital and had a consultation with the doctor who determined that backing up all the photos and music (a whopping 190GB worth) and a full reinstall was in order. He also removed multiple viruses and warned that the processor could have sustained some damage.

I brought it home from its trauma and memory loss to fully recover and gradually get to know its friends like iTunes and the internet etc again.

Swing forward a couple of days and I think the warning about processor damage may be right as it is shutting itself down anytime photos are involved. It took many many shut downs and restarts to sync my phone and even then it won't let me put multiple folders of photos onto my phone as I previously could. Editing photos is a complete no no!

The good news I suppose is that it seems to only be iTunes and photos it doesn't like. The Internet is staying on for now which it didn't before and we can now download the latest windows updates which viruses prevented before.

I'm of the mind that it might not be worth getting it looked at again if there are parts needed and why didn't the computer doctor fix it properly? We can't afford a new one so maybe it will have to go somewhere else for fixing this time.

Back to lack of blogging due to computer issues I'm afraid :(((
Posted by Kerry at 2:27 pm 0 comments

A Few Days Away

We had a few days away in a caravan at Barmston Beach on the Yorkshire coast for the school holidays.

For now I'll leave you with one from my phone that I absolutely love. The coast line is rapidly eroding and this bit of eroded cliff mixed together with the sun being at just the right position made for a shot I couldn't resist of myself and my middle son in the shadow. 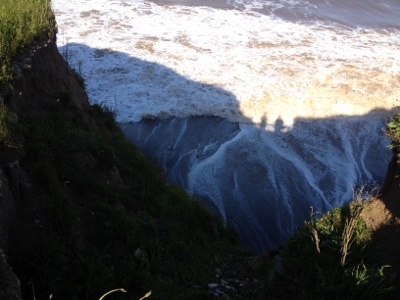 Home For The Summer

My girlie is home for the summer from her second year at university and look what she brought home with her :)))))
You'll have to excuse the very bad photos and shadowing as our computer is very poorly and I'm using my phone for most photos I need to upload.
There is a Krispy Kreme outlet in the city where she lives during term time and we've never had them before so I asked her to bring an assorted box of 12. I hadn't told anybody and the boys' faces when they saw them were a picture - wide open eyes, huge smiles and most probably some dribbling!

I let them all choose one and then went for what I thought was a plain jam doughnut which turned out to be apple (not my favourite). We get two each though so I'm eyeing up the iced one on the top row with white chocolate bits on.

These photos really are shocking and not because they are iPhone pics.
We will ignore the fact that the girlie brought enough stuff back with her that there was hardly any carpet space left in the living room because she is home for the summer :)))))))

I picked my box up from the delivery office this morning.  I had a sneeky peek at contents online from the dispatch note.  Unfortunately one item in this box made me cancel She Said Beauty before this box even arrived.  See if you can tell which it is before I get to it

I will apologise in advance for this photos as I'm using my phone for uploading most things at the moment because our computer is very poorly.

The contents in their pink and aqua boxing 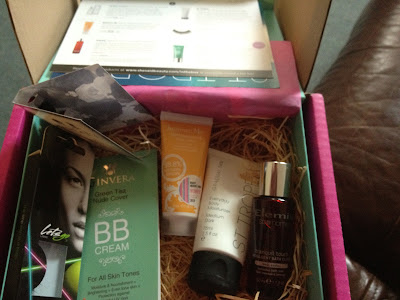 I don't use self tan after several rather orange disasters a very long time ago. This however is a gradual tan moisturiser so I'm hoping it will build up gradually.


﻿
This smells divine. My son asked what the lavender smell was so I'm guessing it must be similar but I hate lavender so I'm not so sure.  It is perfectly sized for handbags at 30ml and I will definitely be using it. My preferred hand cream will always be Hemp by The Body Shop.

Contains skin conditioning cocoa butter, combined with sensuous patchouli, cedarwood and vetivert leaves your body soft and mind soothed.  Definitely one to keep until I can have an uninterrupted bath. Smells absolutely gorgeous.

Designed to celebrate the diamond jubilee here in the UK.  The blurb reads - a sophisticated sparkling fragrance opening with a touch of pear and bergamot surrounded by a subtle note of honey, with a delicate, romantic floral bouquet enhanced with a soft woody and vanilla base.

Yardley has always seemed like an old woman's perfume brand to me. They have some pretty gross smells amongst their collection but this is really nice.  I shall be wearing it all this week and be patriotic.

Supposed to brighten and even skin tone.  Looking forward to giving this a try.

and that just leaves these

If you haven't already guessed, these are the reason for cancelling my subscription.  I am so fed up of getting fake eye lashes.  I really don't like them! enough said

Overall though I like this box and will use everything (provided I don't end up looking like an oompaloompa after using the St Tropez) with the exception of the lashes.
Posted by Kerry at 4:06 pm 0 comments