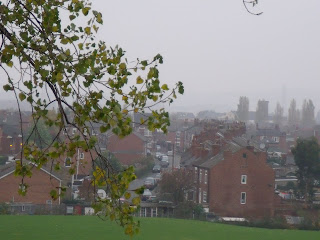 Now there is definitely a big merchandise opportunity/rip off out there depending on how you look at it. I'm looking at it from a rip off point of view (not by myself but by greedy Ebay people).

Anything remotely Twilight or vampire related has people flocking in droves. I saw the most gross pair of gloves the other day on Ebay and to be honest they looked like a pair of those cheap pound shop ones that somebody had splattered red paint on. Totally gross and not something you or I would probably wear but because the seller had put Twilight as the title they were selling like hot cakes.

Then I found this listing. It looks very very similar to the Bella's mittens pattern I found by Subliminal Rabbit. I think I would be rather miffed if that were my pattern somebody was using to make a profit instead of just for personal use.

Anyway I was browsing the counter thingy stats the other day just out of curiosity as to where my readers are coming from and which post they are entering the blog at. Twilight socks is the most popular entry point but they aren't even Twilight related as the pattern was written way before the movie became popular. So far I've only completed one and really must get around to the other at some point. 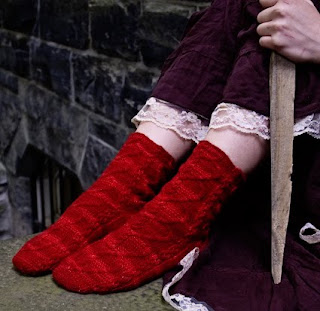 In all seriousness I will probably have a go at these but only because I like the intricate pattern and I will probably do them in a nice non vampire related colour.
Posted by Kerry at 7:41 am 12 comments

The Trees They Are A Changing

.......and the leaves they are a falling. Well they were in our local park this afternoon when I took Daisy out. 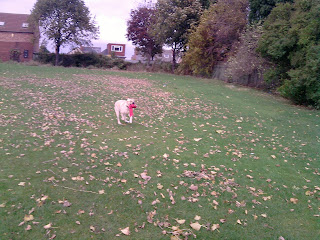 Oh and check out the blogging course Shimelle is doing - link at the side. Two of the things that lots of people just do not get - scrapbooking and blogging combined. I love it.
Posted by Kerry at 7:37 pm 6 comments

At last my knitting finger is on the mend from it's stupid peeling reaction to the tablets the doctor gave me for my ankle pain. Socks will follow........
Posted by Kerry at 1:55 pm 1 comments

For Skywatch Friday this week (and the lack of interesting sky) I decided to cheat a bit and use a picture from last month of an almost full moon. Not a very good picture I know but sky nevertheless. 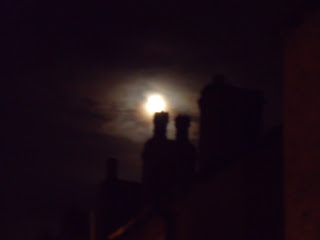 Speaking of moons - I'm almost done for the second time with New Moon by Stephanie Meyer. I figured that since the film is due out next month I had better revisit the book to refresh my memory. I picked up on quite a few things this time that I missed last time. Beats me how Jacob can be described in the book as huge and well over 6ft 5 and Taylor Lautner - the actor playing him is only 5ft 10. Anyway in honour of moons and reading the Twilight series again here are the Twilight mittens again. 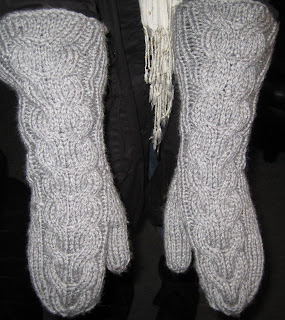 My shop has had a revamp thanks to the graphic art talents of Kirsty Wiseman. Isn't she fab?

No knitting and I'm getting bored not being able to do any. I tore some ligaments a while back and the doctor gave me strong heavy duty anti-inflammatories which have given me some nasty side effects including a skin flare up. The part of the finger I use most for knitting is very sore hence no knitting. Boo hoo.

Good news for me is that I have been able to focus more on scrapbook layouts. Here is one I did with last month's My Creative Scrapbook kit. I added a few Prima flowers. It's the first time I have used one of the swirly things Prima do. I found it very versatile and will definitely be using one again. That's what I like about kits - you get things you maybe might not usually try. 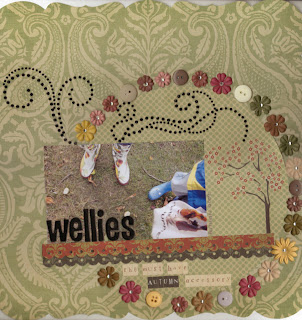 Blue sky - a first for me on Skywatch Friday. No gloomy overcast skies today. There is even an aeroplane in the sky. 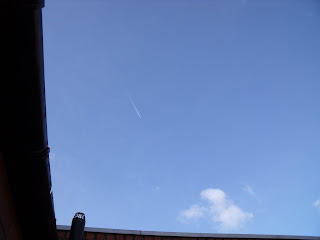 It was a bit grey earlier on and when I popped my head out of the back door I spotted this little man sat on the roof. Looks like there are a few spiders making a home up there too. 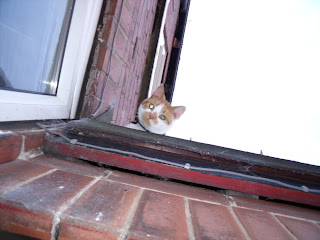 Couple of layouts made with the October Scraproom kit. 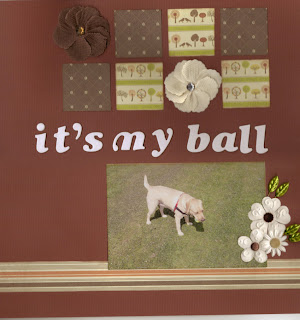 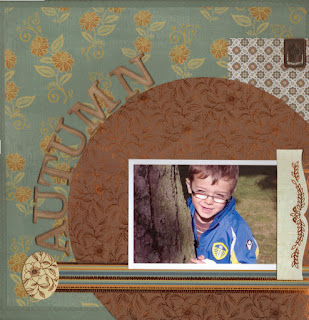 A Girls Trip Out

My weekends are usually spent as a football (soccer) widow but this weekend was different.

Hull Uni had an open day so off we went (me and my daughter) for a looksie round. Totally forgot to take the camera so no piccies of the university. It looks very nice though and is in quite a good area for a city with a bad reputation. The accommodation blocks are in a very posh area a couple of miles from the uni and it was heartening to see a mini police station in the grounds. Maybe not so nice to see inside what a typical shared bathroom looks like.

Anyway the journey included a trip under the humber bridge. This is a view from the distance, my daughter took it with my phone and then another when the road went underneath the bridge. Not sure I would like to drive across it. 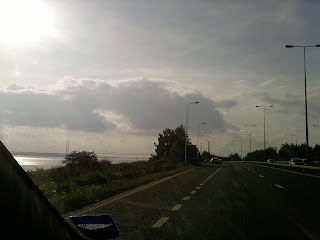 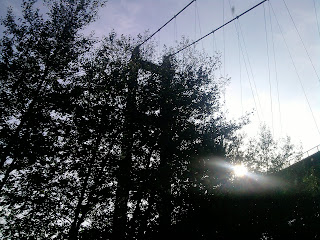 and just look at that sky. Only friday's product boring skies because it knows I am going to photograph it for skywatch friday.
Posted by Kerry at 12:04 pm 1 comments

Another boring overcast sky I'm afraid this Friday for Skywatch Friday. Most of the week we have had lovely sunsets/sunrises/blue skies/rain skies but today nothing interesting at all.

I took a pic through the trees when I took Charlie to the park this morning. I tried to get dog, tree and sky but it didn't work too well so we have the combined pic, followed by a tree and sky shot and lastly a dog shot. 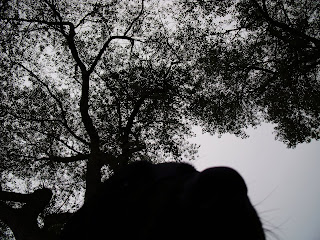 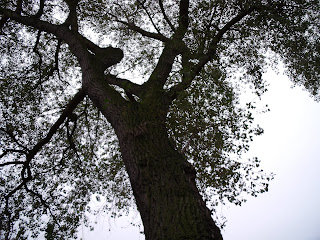 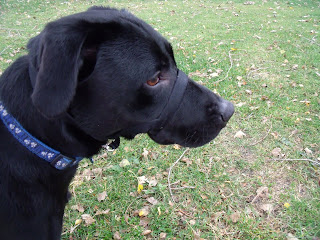 and last but by no means least I went to the football with the family earlier in the week. I haven't been for a very long time and it made a nice change. 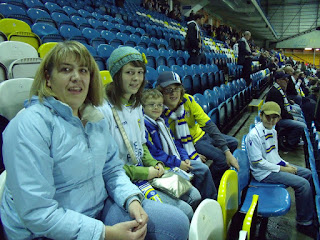 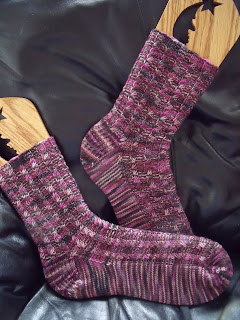 These are the beginnings of Jeannie Cartmel mystery socks. I may or may not be back with an update on the progress of these in the next month of so. Hopefully yes but maybe no depending on how they go. This is the yarn I tried to dye with beetroot and coffee a few weeks ago but most of the colour fell out so I overdyed it with kool aid. 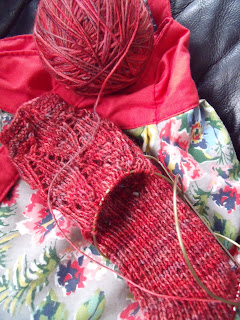 Learn Something New Everyday ended with September. I didn't manage to do as I had planned and scrap a page a day so instead I have combined it all onto one page. I hate the pink hand cut LESSONS letters but I couldn't find any alphabet stickers where I had enough s's left and I wanted to get it finished. Alphabets must be on my 'to buy' list soon and then I can replace them. 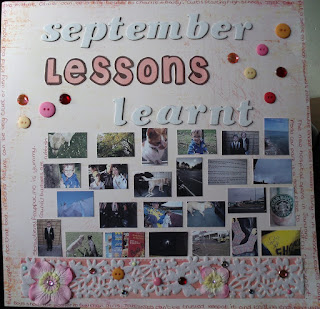 I have a monthly challenge running on my shop blog where you can win two sets of Prima Say It In Pearls & Crystals and a big bag of flowers. All you have to do is to upload via My Linky on the blog a craft project, scrapbook layout, card with flowers to enter before the end of October.
Posted by Kerry at 11:05 am 2 comments

This Skywatch Friday the sky is producing some of the wet stuff that we haven't seen for a while. 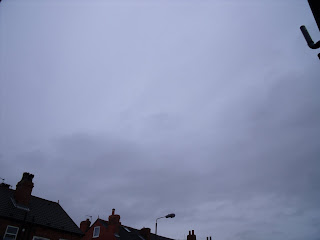 This year I joined Socks That Rock - a sock knitting kit club and the September one has just arrived.

The designers of the socks in the kits are all very well known but this month it is Cat Bordhi who I would consider part of knitting royalty. There is only one kit left for this year but 2 designers on the list so hopefully in November there will be 2 patterns. One of those designers is my absolute favourite sock designer - Cookie A who also has a lot of free patterns available in the online knitting magazine Knitty

Anyway this is the September kit. Yarn is called River Rocked and it is gorgeous autumnal shades of browns and teal. 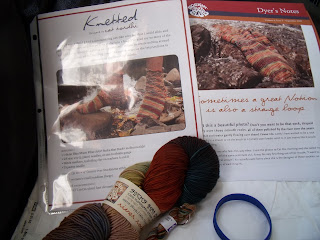 and this is the pattern. Hopefully work will start on these very soon. 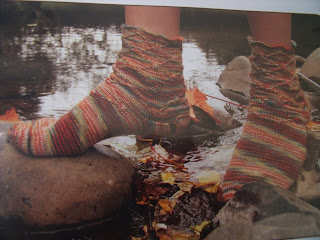 and as for that sari silk yarn. It is going in the bin. I have done about 12 inches of the scarf and it looks a complete mess. Even holding it very gently there are lots of sections where one slight tug and it is broken so I am admitting defeat.