It was a year that certainly taught me a few lessons which is never a bad thing.

Without going into detail, which isn't my place to do, I learnt an awful lot right from the get go about mental illness and how it affects the person suffering from it and the people surrounding them. I knew a fair bit about autism and the affects of that having two sons with it but when they are affected in other ways it is a real eye opener. I'm leaving that right here as it isn't my place to discuss it.

Back in February we lost our cat Toby. He was only 2.5. He had been peeing in very random places for a while but we put it down to a shift in house dynamics - one child moving into their own house, another and the only one Toby really gravitated to moved back to university. I took him to the vets a few days before he died, she seemed to think pretty much the same as me but wanted a urine sample just to be sure. We never managed to get the sample as it became clear he was just going where he was. I got some special litter from the vet and locked him in my son's bedroom to be sure it wasn't a sample from one of the other two cats but he just went on the bed or the carpet. The next day he took himself into a storage area in my bedroom as he did a lot of days but didn't come out for food that night. He was always the first to want feeding and most nights came and stood in front of us and put his head to one side with a look that said 'come on human my belly is rumbling'. We got him out of the hidey hole he was in. He had been sick and couldn't stand up. We tried to get some water down him but a short time later, after being sick a couple more times, he made the most awful scream that will stay with me forever and just died. Everything points to kidney failure and I should have taken him to the vets way before I did instead of putting it down to behavioural issues with the litter tray. His ashes are in a beautiful box in his little hidey hole. One day I'll scatter them but that day isn't yet. 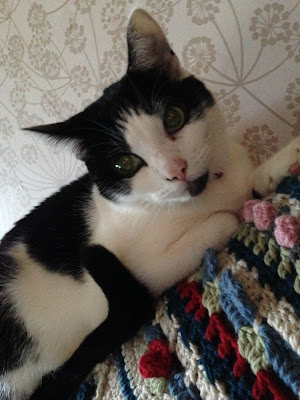 At the end of June a friend took in some stray kittens on behalf of a policeman who had had them handed in at work. This is the same friend we got Percy from. Enter Hugo. I wasn't going to get another cat after Toby but he was just too cute to resist. He's been a learning curve. Razor sharp claws and an insane greediness have been big obstacles but six months in we are getting there. 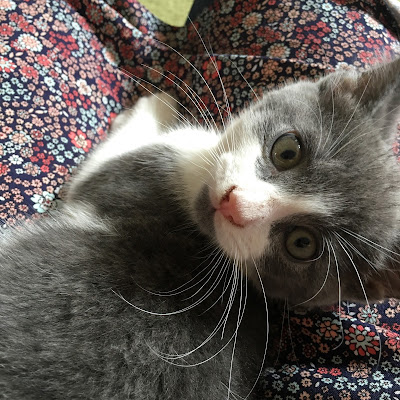 and then he does something like this! Being greedy and thought he was pinching crisps but it was actually an empty packet that he got stuck on his head 😂 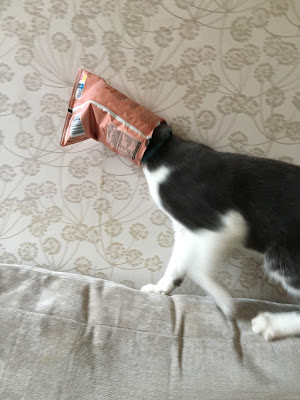 Another lesson that I'm not going to dwell on but need to write down for my own sake is people coming out of the woodwork when they think they can interfere in things that are nothing to do with them. This is related to paragraph 1 and is probably a misguided sense of wanting to help but when in laws pop out of the woodwork that haven't taken a bit of interest when we were dealing with some pretty tough stuff when the boys were diagnosed with autism 10 years ago it stinks of too little too late nosiness. The mother in law has only been in touch to send birthday cards and at Christmas. No telephone calls during the year at all for many years. The sister in law hasn't even bothered with cards for years. I suppose it could work both ways as my husband has not gone out of his way either but as a parent I just can't understand it. I couldn't go that long without talking to my kids.  It's unfairness as well that really sticks in my throat this year. Fpr Christmas daughter was given £100 of supermarket vouchers, my sons got £20 in a card. Their cousin's girlfriend tagged the mother in law on Facebook thanking her for her £100 in vouchers. I get that my daughter has her own house and I don't know the cousin's girlfriends circumstances BUT two of my sons live away from home during term time and have to feed theirselves. They aren't children. I find it thoroughly unfair that she has chosen to favour one child over the other three and am extremely cross that their cousin's girlfriend should also be favoured. This is not my daughter's fault though so I'm leaving this right here in 2016 with the lesson that I will not let myself get into that situation with my own kids and I will always treat each and every one of my grandkids fairly if I am lucky to be blessed with any.

The dogs have had their issues this year. Daisy more than Charlie.  I will admit that I haven't walked her as much as I should and she has put a lot of weight on. We put them in kennels overnight while we had some flooring fitted.  The next day she was struggling to walk so I popped her to the vets.  They diagnosed arthritis in her back legs.  She also had a problem with her anal glands requiring surgery. I've had to really change her lifestyle and apart from one blip when she had a nasty sickness and couldn't get up properly as she was so weak, she is now walking a lot further and has lost a fair amount of weight.  Any excuse for snuffling in the leaves. 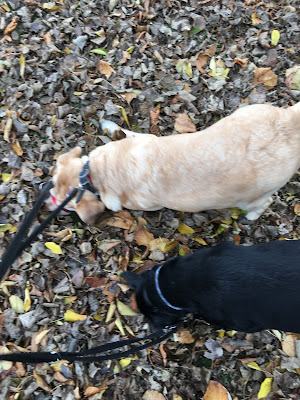